Symphonie Atlantique is rapidly establishing itself as an ensemble to watch. Based in The Hague, the orchestra is becoming an increasing presence in the Netherlands’ vibrant early music scene, as well as performing regularly on major international stages in both Europe and Latin America. Bringing together young professionals from all over the world to perform Classical and Romantic repertoire on period instruments, Symphonie Atlantique performs without a conductor, led from the violin by artistic director and concertmaster Rebecca Huber.

Since its inaugural performance of Beethoven’s Symphony No. 7, one of the first performances of the piece on period instruments without a conductor, Symphonie Atlantique has enjoyed great success in its early years. The group has performed and recorded repertoire ranging from early Haydn to Mendelssohn live on the radio, and in major concert halls such as the Caixa Forum Concert Halls in Madrid and Barcelona, and the Dr. Anton Philipszaal in Den Haag. The orchestra has also recently performed in the Dorpskerk, Voorschoten, as part of the acclaimed Musica Antica da Camera concert series, and in more intimate salon settings such as at the Résidence of the French Ambassador in The Hague.

Symphonie Atlantique has established a close working relationship with internationally-renowned countertenor Michael Chance, with whom it toured in Mexico, and, most recently, performed scenes from Gluck’s Orfeo ed Euridice in the beautiful Old Library of the Rijksmuseum, Amsterdam. The orchestra is looking forward to making its Concertgebouw debut in April 2015 in collaboration with Michael Chance in a pioneering performance of Handel’s Giulio Cesare, directed from the violin by Rebecca Huber, alongside eminent soloists such as Lawrence Zazzo, Patricia Bardon, Anna Christy, and Tania Kross.

Research into appropriate historical performance practices is at the heart of Symphonie Atlantique. In particular, the group has made a thorough study of 19th-century bowing practices under the guidance of specialist performers and musicologists such as Claire Holden and Job ter Haar who are at the cutting edge of research in the field. Their first performance of Beethoven’s 7th Symphony using historical bow strokes was heralded as an example at an international seminar about ‘Articulation and Legato in Beethoven’s String Writing’, in London, May 2014. Concert master Rebecca Huber has undertaken extensive research into the role of the violin conductor in 19th-century performance as part of her Masters at the Royal Conservatory, Den Haag, and founding member Rachel Stroud will be returning to Cambridge University to explore notation and performance in late Beethoven. The group’s members are constantly striving to extend their knowledge of historical performance practices and to use their expanding knowledge to enliven their performances.

With musicians from countries spanning five continents, the group benefits from a wealth of diverse musical experiences. With its sparkling performances noted for a thrilling energy under the direction of Rebecca Huber, bringing the ethos of chamber music to the symphony hall, Symphonie Atlantique offers an engaging performing platform for the new generation of period performers.

N.B. Symphonie Atlantique was formerly known as Les Vents Atlantiques, but the name of the group has changed to reflect the group’s increased forces. 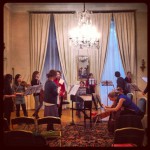